This craft has been very close to my heart but I took so long to post it because I wasn’t sure how will I explain it here. But before let me explain a Najmat-ul-Qudus, This is an ancient Islamic symbol of two over-laping squares (qudus) making a star (najmah) Read in detail here.

Its a pretty easy craft and just require few items, for the threaded Najmat-ul-qudus you only need:

And for the wall-hanging, I used assorted beads and a pom-pom. 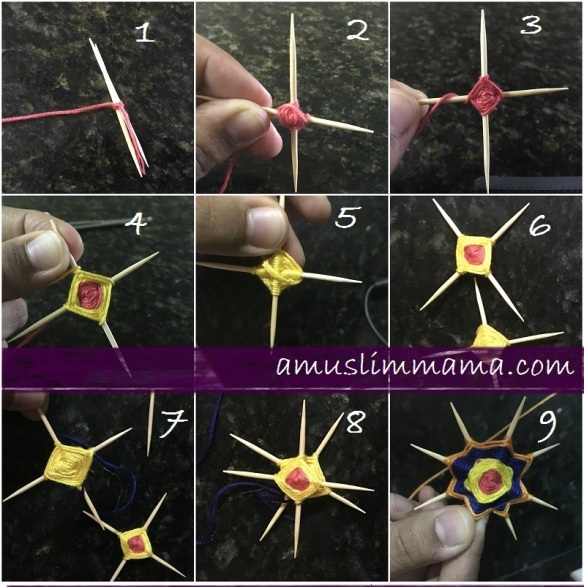 The Steps are shown above, you start by tying two toothpicks together and open them to make a cross, then start making knotslike this: I found this image online from : http://www.imogensangels.com.au

Now overlap two squares as shown in pic 8, tie a blue floss at one tip and continue making the knots leaving 2 sticks in between – the pattern will be, a knot and then leave two sticks and another knot on the third one, continue doing till you see a star forming.

I repeated the process with blue and mustard floss.

Then I used Green to make a square, the pattern is a knot then leave a stick and knot the next, three rounds like that and three rounds with a red and then a loop of yellow, knot on every stick. Phew!

I made three different styles. and tied them together using wooden beads in between with a glue-gun.

And ended with an orange pom-pom. Phew. And trust me it was easy ! 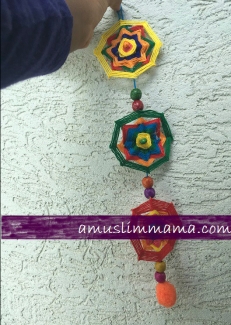